Our warm winter is coming to an end and the cold has begun in earnest. I guess that we people in the northern part of the country should expect that, but of course it throws us into a tizzy when it happens. December and January is not normally nearly as warm as it has been (sometimes days with temperatures well above freezing) so I will be grateful for what I had.

On Friday, I went to the barn to feed my two ewes when I took a peek into my daughter's goat stall. Standing there was a tiny buckling, dried off but shivering. We left him with his mother until Saturday morning, but noticed then that he was very cold and could not nurse. After some research, we determined that he was hypothermic and simply could not latch on enough to nurse. At that point, we had to bring him in the house and get him warm really quick. We did give him supplements along with colostrum from the mother goat. Well, long story short - when this happens you just have to keep the baby inside in the warmth until the cold snap ends or he's big enough to withstand the temperatures.

So...we are keeping this little guy in the house and bringing him outside every two to three hours (with a doggie jacket on) to nurse from his mother. Then, we take a screaming baby from his screaming mother and bring him back inside, where he basks in the warmth on the hearth rug in front of the wood burner. No kidding. Lots of fun. By the way, this is a nigerian dwarf goat and he's really tiny. Right now he's 5 lbs. and gaining weight slowly. Lots of energy and pretty spunky when he's not sleeping. 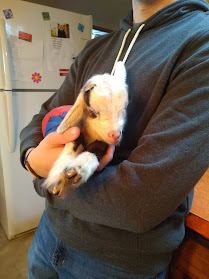 For this week's menu plan, I decided to do some warming soups. Thursday has become our left-over night, but often I find we don't have left-overs. We do have grown boys that eat a lot 😃. On those days, I just search through the freezer and pantry and try to come up with something easy. Sometimes it's a package of hot dogs (which I loathe but they can come in handy) or a can of whatever. I do prefer to have a plan, though. Here's mine:

One Pot Ham and Veggie Pasta

Left-overs and Whatever Else